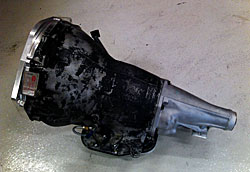 Following on from a relatively disappointing debut of the new engine in the GXP at the Australian Nationals I returned home to Melbourne and got underway ordering parts for the carburettors and transmission.

I mentioned in my last update about the engine being very rich off the line and through 1st gear and it wasn't until the top end of second gear that it started to clear itself up. One of the first things I did when I got home was to call Bob Book at Book Racing Enterprises as he built the carburettors for the motor and we spoke about a number of changes that needed to be made. I ordered a handful of parts from Bob and they were promptly on their way to Australia for me to fit to the carbs.

Putting the pieces back together 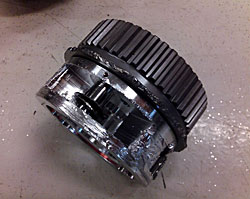 Broken planetary from the ProfliteObviously the biggest disappointment out of the Nationals was the almost total destruction of the Proflite caused by one of the planetaries not handling the power of the new engine. As you can see in the attached pictures one of the planetary pinions disintegrated and damaged a number of pieces in the transmission (including the valve body) as it came apart.

Whilst we were in Sydney Fred Soleiman (fellow Super Stock competitor and proprietor of Protrans in Sydney) had a look at the broken parts and made a list of new parts that would be needed to put the transmission back together. As soon as he got back to work on Monday he got onto quoting the parts for us and after a couple of weeks they arrived and Paul and I started putting the transmission back together. 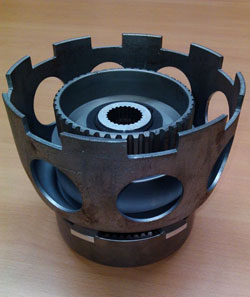 New planetaries should do the trickAfter a few small hiccups during assembly the transmission is together and is in the car ready to go racing. All I need to do now is run the engine, check the transmission and make the changes to the fuel pressure as mentioned earlier.

Racing the GXP on the 1/8th mile is going to be interesting as I will be shifting into third gear just before the finish line. My hands will be busy between the gear level for the 2-3 shift, then up to the parachute lever at the line, then back down to the shifter to move it into neutral! I have a couple of converters and diff centres to choose from, so I will be selecting them based on the weather and track conditions as per a normal ¼ mile event.

Even though the event will be in the middle of a hot Victorian summer I am expecting the weather to be relatively mild so close to the ocean. If there is a southerly breeze the air could be quite nice and cool, however if there is a northerly blowing it could be very hot and dry.

The other interesting factor for this event is it is the first time Group 2 racers have raced over the 1/8th mile. All of the class minimums (records) were calculated off the 1.4 mile ET's and for example my ¼ mile and 1/8th mile records are within about one hundredth of a second based on my old engine that was able to run on the record flat out. For a turbo car that is generally slower in the first half of the track they may be disadvantaged a little and the Super Charged cars might be a bit faster to half track than the calculations suggest. Either way we will find out soon enough and I am expecting lots of records to be broken over the weekend!

My next report will be a race summary from the Portland event with hopefully some great news about the performance of the GXP, a trophy in my trophy cabinet and some points towards the championship.

I would like to take this opportunity to wish you and your families a fantastic Christmas, happy New Year and if you are racing over the holiday period safe racing and good luck!