Wow... what a weekend at Fuchs-Southcoastraceway Portland for round 2 of the Aeroflow Sportsman Championship!

But let's rewind back to Wednesday when I was preparing the car for the weekend. Whip the valve covers off to do the rockers and find coolant on top of the head. Hmmm... ring Paul Rogers and he says we can fix it Friday night at the track. Catastrophe averted.

Drive down to Portland Friday and get in about 6:30pm. Set up and Paul comes over to fix the problem. Seems I've got some leaky studs which is pretty common for a 400 Chev. Paul works his magic and Robbie Cassar gives me some goo to put in the radiator in the morning.

Michael Bibby and I are sleeping in the trailer for the weekend so we both wake up with sore backs in the morning – checker plate flooring is not that good for spinal posture. Put the goo in the radiator and go through the normal warm up procedure. Fingers crossed this works; lift the valve covers off and no water! We're back in business baby.

Originally I was entered into Super Sedan but it turns out that Super Gas are short 1 car so I move into that bracket so the boys can earn points from this meeting. As probably the only other car there with a throttle stop (I never took it off) it makes sense. I'll be honest; I was going to make up the numbers and expected to be 1st round cannon fodder.

After qualifying is done for the day I went and picked up the qualifying data from Scott Cleary and set about getting the info up on Just Drag Racing. There we were, freezing in the evening breeze using an electric camp light to see the index sheets and posting up info as quick as my cold fingers could type. With a belly full of fish and chips and a couple of JDs it was time for bed.

Oh – did I mention we got up at 5am each morning to have a shower? With only two showers at the track you had to get in early with so many racers camping on-site. So I'd go and have a shower and then try to go back to sleep for a couple of hours.

Wake up Sunday morning to beautiful blue skies and a fairly strong breeze. It's race day and the atmosphere is different – a little more tension and excitement. After getting the car ready it's time for 1st round.

Just my luck, I get Colin Griffin. I cheered for Colin from the Calder Park mounds for years before I got my own car and started racing. I've got lane choice so I put Colin in the right lane. The lights flash and the Camira pulls the wheels into the air. I see Colin out of the corner of my eye and I know he's got the jump on me. Collin pulls in front towards the finish line and I give the breaks a dab as I know I can't cross the line 1st. I think – well that's it, thanks for coming.

I see the Territory coming down the return road and Michael gives me the fist pump. We won 1st round – I'm shocked. Turns out I ran dead on with a 6.300 and Colin broke about by .01.

Next round we face off against Darryl Stephen from Sydney, multiple national event winner and Super Gas champion. This time I win the battle for the tree and cross the line in front with a little touch of the breaks. Turns out I go 6.318 to Darryl's 6.346.

Huh... well there you go. I'm into the final against Matt Forbes. Now Matt is a great racer and has taught me a lot about drag racing so I know I'm up against it. The Camira is actually Matt's old car before he bought his new 27 T Roadster.

As luck would have it I have lane choice for the final. I know I have to cut a good light 'cos Matt is killer on the tree and the Roadster moves like a feather weight boxer – quick. So I've got my angry face on and I'm staring at it like I want to pick a fight.

Lights flash and bang we're off. I don't see Matt in front of me so I think its pretty close. We get towards the finish line and Matt pulls in front, gives the throttle a couple of womps and crosses in front by a small margin.

For me the fun isn't over. For some reason the car gets really loose after the finish line and makes a left turn towards the wall. Having crashed before I know not what to do. So I get off the brakes, relax my hands on the wheel and the Camira comes back around. Phew.

Get round the corner and pull up. Get all my gear off and get ready to congratulate Matt on his win. Matt put's out his hand and says well done... huh??? Turns out Matt red lighted by a mere .002 and used the run to practice his finish line technique (always thinking). I ended up running a breaking out 6.297. 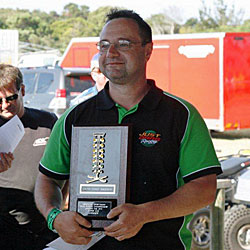 Collecting the winner's trophy in Super Gas (Photo courtesy Dave Hope)So what started out as a weekend with little promise turned into a win and 100 points in the Super Gas Championship. The JDs went down well Sunday night but I didn't fare as well the next morning, being the last racer to leave the track at about 11am.

Before I sign off I want to say a big thanks to Michael Bibby, Peter Robinson, Andrew Bresnan and Derek Newman for all their help on the weekend. It was fantastic to just think about the racing and not about the car. Everything was taken care of and I never asked or checked on anything. And a big shout out to Paul Rogers for fixing the leaky studs at the track just as it was starting to get dark. Legend...

I'd also like to thank all the Just Drag Racing marketing partners. Their support means we can continue to produce great content for all you racers and fans to enjoy...

With that 100 points it looks like we need to make a decision about our next race. Should we chase the points and head to Adelaide at the end of February? I'm going to find my magic eight-ball this week for the answer :-)