Things have been a little quiet in the workshop since the Portland round of the championship. This is due to the next race meeting being 2 months after Portland, in Perth on the 2nd and 3rd of March and lots of time to get everything done.

Normal activity after a race meeting is to get straight onto stripping the car down and checking everything is ok and working out what needs to be done to get ready for the next race meeting. As you know from my last update this was a pretty faultless meeting on the cars behalf so compared to recent times there wasn't much work required. 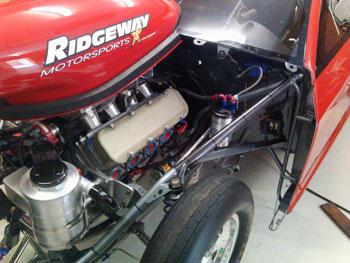 First order of work was to get onto Peter Ridgeway and have a set of headers built in the USA for the new engine. The old Gebbler Tri-Y headers I had on the old motor were originally off a 358ci Pro Stock truck motor and are a little small for our 400ci motors, although they perform very well.

When I first lined them up with the exhaust ports on the new heads they needed a little bit of touching up on the flange to ensure they didn't overlap the port and have the exhaust gas hitting a square corner. After a bit of discussion and measuring flanges and port angles I am having a new set of headers built by Peter's headers guru in the USA. They will be Tri-Y's and they will be much different to the old Gebblers on the car now and they will be worth power! - That is the exciting bit! :-)

All going well the headers will be here for the Western Nationals in Perth and if the timing works out I will be bringing them over to Perth as carry on luggage! I hope Virgin don't mind!

Onto the transmission next and after a very successful first meeting with the completely rebuilt trans, I have done an oil change and swapped the converter over. I learnt a lot at Portland with my second converter in the car and I know there are improvements to be had with the other converter in there.

The engine received an oil change and a new set of intake springs which is regular maintenance on this type of engine. 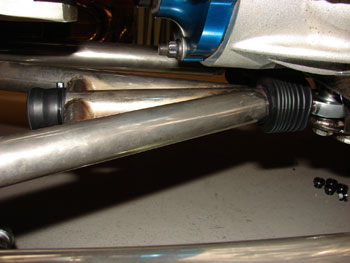 The remainder of the GXP has had a good clean and I have made some small adjustments to the carburettors as well. One small improvement I made to the car was a little dust boot over the sliding joint of the wishbone. After every meeting I pull the wishbone apart and regreased it only to be full of dust and dirt. The new rubber boot will eliminate the dust getting in there and reduce the amount of cleaning and regreasing I have been doing between meetings.

Next week I will be loading the GXP into the container for the ride to Perth and sharing it with Lee Bektash as I did last year. While loading the cars is pretty straight forward, fitting all of the tools and equipment in is a bit more of a challenge.

I am predicting Super Stock will be pretty big at the Western Nationals this year and in particular B/APA. There are a couple of local B/APA cars, Steve Norman from Adelaide and Jodanna Pullen from QLD possibly coming down. If we all qualify there could be 5 x B/APA cars fronting for the first round of eliminations! It might also make qualifying interesting if any of us are capable and willing to run under the record!

I am heading over to Perth early to test in on the Wednesday before the meeting and have my fingers crossed that it isn't going to be too hot and more like the late afternoon weather we will be qualifying and racing in on Saturday and Sunday.

If you're at the Western Nationals make sure you come up and say g'day or cheer out from the stands.