Leanne Bernhard and I set off from Melbourne early on Friday morning to make our way to Adelaide for the 3rd round of the Aeroflow Championship. Obviously not early enough as we hit the Monash Freeway and come to a shuddering halt; so much for meeting up with Matt Forbes in Ballarat.

All things considered it was a pretty uneventful trip except for the road works from Ballarat in Victoria to Talem Bend in South Australia. I don't think I've seen a 25km speed sign before – these must have been hand painted.

Approaching Adelaide I can feel the excitement start to build. I saw my very first drag race as a 5 year old at the track I'm now going to race at for the first time. This is where it all started, my fascination for the sport we all love.

But before we get to the track we have to negotiate the Adelaide Hills and make the run down to Portrush Rd. About 2 thirds of the way down the brakes on the Territory start to vibrate. We get to the bottom of the hill and the smell of over-heating brakes fills the car. I expect to make the 6 o'clock news – "Stupid Victorian's brakes burst into flames descending the Adelaide Hills." 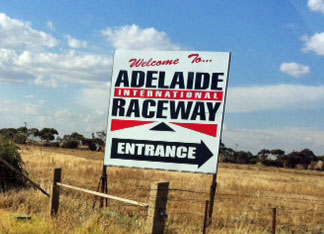 With the brakes now cooler after sitting at the lights for a while, the GPS takes us on the scenic tour through the heart of Adelaide assuming we want to see as many landmarks as possible. Eventually we end up on Main North Road, which if fairly narrow for a major thoroughfare, my trailer barely squeezing past trucks on either side.

Onto Port Wakefield Rd and now we're trucking. The track is not far away and a sense of nostalgia sweeps over me. I'm busting to get there, setup and have a good look at the track. We head down past the market gardens and the Adelaide International Raceway sign pops into view. Finally, we've arrived.

Let's get this party started...

We start to setup next to Jak Kane Racing who we're staying with for the weekend. With our pit space organised Jak takes us on a tour. We check out the deep end and have a look at the track, first working out where the finish line is and then having a look at the start line. The place looks smaller than I remember and the hill not as steep. To a 5 year old it was massive.

Next stop is back at the pits to do some basic maintenance. The Camira lives in the trailer so it doesn't get much love except for before a race meeting. This needs to change as you'll read later.

With the Camira all tucked up for the night we head back to Jak's place where a hot shower and a big bowl of pasta is waiting for us. Good food and plenty of it is a theme for the weekend, with Jak's family putting on a spread that would put a lot of those wanna-be chefs to shame.

Before the head off to bed the last of the weekend's guests arrive on a delayed flight from Sydney, with Chris "Show Time" Manks, Brian Mortensen and Tommy Fareed making a grand entrance. Rather than beers, it's cups of tea and off to bed.

The heat is on in qualifying

It's an early start Saturday and we're at the track by about 7:30am and get ready for our first qualifier. By 9am it's all ready above 30 degrees and there's a steady cross wind blowing. This weekend Leanne and Brian are crewing on the Camira, Leanne on towing / appearance duties and Brian as crew chief.

Crew chief is the right description for Brian as he quickly takes over the job of preparing the Camira. My role is to drive the car and work the laptop and weather station to find the magic throttle stop settings. Now I'm not the most mechanically minded racer out there so I'm loving this division of labour.

For the 1st qualifier I go into the left lane, run through the usual procedure, roll into full stage and wham the tree lights up before I'm on the converter. I cut a terrible light and run it out the back door to record a 9.956 on the 9.90 index. Not too bad considering I don't have any data and the heat is worse than expected. After the run I go and have a chat with the meeting director about the speed of the lights as I was not the only racer to think they were a bit quick.

Later in the afternoon we have our second qualifier. This time I'm in the right lane and I've taken a stack out of the throttle stop to try and get closer to that elusive 9.90. The altitude is at almost 3,000 feet and there's a slight head wind. This time I cut a 0.024 light and leg it down track to record a 9.946, only .01 better than qualifier 1. Looking at the data I can see I lost a fair amount of time in the second half of the track which could have been caused by the oil down a little earlier.

The final qualifier was held in the early evening, the sun was down and the altitude back to around 2,000 feet. I put a little more in the throttle stop this time and a 9.893 flashes up on the left hand scoreboard.

With qualifying done and dusted, we finish in 3rd position and draw Bruno Romeo in the 1st round. Bruno has been on fire lately so I know I've got my work cut out. It's also a bit crap because we all "bonded" at the previous meeting at Portland; Coronas and mamma's lasagna... yum.

Rise and shine, it's race day

So it's race day, no expectations, just remember to relax and go and have a good time. Easier said than done...

We get to the track pretty early and start to get prepared. Super Gas isn't up until after lunch which gives me plenty of time to mull over how to handle Bruno's big mile-an-hour. All I can come up with is cut a light and hang-on to the finish line.

After an oil down we're pushed back a bit but finally the 1st round arrives. Lane choice is with the Camira so I'm in the left lane. Bruno does a big smokey burnout and I wait for him to start backing up before I do mine. Both in stage, lights flash and boom we're at the 60 foot marker. Bruno begins to fade as my stop comes off. At about half track I start looking; nothing yet.

When I get to 1000 feet I can see the nose of the Pontiac appear in the corner of my eye. Now my heads swivelling back and forward, looking at the finish line, looking at Bruno, trying to figure out if he's going to catch me or not. It's going to be close... am I running too fast? By the time that thought enters my head we're both at the finish line and Bruno flys by.

On the way back down the return road I can hear a "whooshing" noise coming from the front right wheel. Get back to the pits and explain the noise to Brian and upon closer inspection the bottom ball joint is loose. Brian nips it up and suggests the wheel bearings also need replacing.

To all the mechanically minded blokes in our pits my description of the problem is hilarious – "whoosh whoosh Brian... here... fix fix". I tell them that if the Camira had a radio I'd simply turn it up to get rid of the problem. Between now and the Nitros it looks like I'll have to get my hands dirty and give the Camira some love.

So onto second round; this time I've got Jonny Ienco in his HK Monaro. Once again I've got lane choice and pull into the left burnout box. This time I cut an 0.019 light and catch Johnny by about half track. I continue to run it to 1,000 feet and then back off to a 9.949 for the win. Back in the pits I work out I was on a 9.88 run which is good because I set the stop to run a little fast in this round.

When Renee Cockerill puts Danny Buccella on the trailer after a double break-out the final is set. Once again I have lane choice. Now Renee's been cutting good lights so I aim to run quicker than 9.90 just in case she beats me on the tree.

We both go through our usual burnout procedures, short and sharp and roll towards the pre-stage beam. Renee goes in first and I creep in second. A few moments later and both Renee's bulbs are on. I breath out, bring the revs up and roll the final inches until the full stage light comes on.

Finger on button, foot off break and then I try and push the gas pedal through the fire-wall. With the engine revving at 5,200 RPM all the amber lights flash. It's dusk so the lights are super bright against the darkening sky and I let go of the button. It feels fast and look down at the tree to see the green light glowing. Phew.

From the launch it's close until the blue roadster starts to pull in front just after the 1000 foot mark. We get to the last mile-an-hour cone and Renee is in front, there's no way I can take the stripe so I touch the brakes just a little. We get around the corner of the braking area and we have no idea who's won. 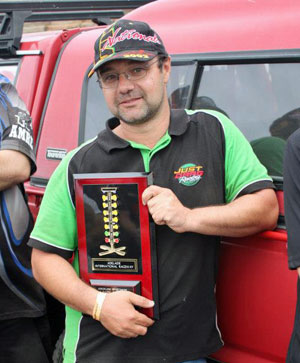 What started out as a gesture to make up the numbers in Portland has turned into 2 event wins in the Aeroflow Sportsman Championship. With 200 points team JDR is now leading the Super Gas title chase and I'm as surprised as everyone else. So now it's off to the Nitro Champs in May to see if we can add a few more points to the total.

Before I sign off I want to thank a number of people who made the weekend in Adelaide possible...

Firstly, thanks to Brian and Leanne for looking after the Camira and allowing me to concentrate on driving.

What can I say about Jak Kane Racing? You won't find a better bunch of people in drag racing. Their generosity is humbling, the food delicious and their company entertaining.

On the home front I'd like to thank Alan Bernhard for allowing me to take up valuable space in his shed and my wife Tania who supports me 100%.

And of course all the Just Drag Racing supporters and sponsors;