What an interesting week I had over in Perth at the 42nd Western Nationals! Making it to the Semi Finals, running under the ET and over the mph records in the worst conditions I have ever raced in.

From my last update you may remember I was waiting on a new set of headers to come over from the USA. Not knowing when they were going to be ready I fitted the Gebbler Tri-Y's onto the car before it went in the container and left for Perth. Fortunately the headers arrived on the Tuesday before the Westerns which was also the day I was leaving for Perth as I flew over on Tuesday night to test on the Wednesday at the track T&T. 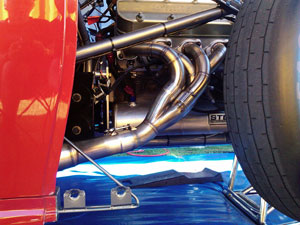 Up bright and early on the Wednesday morning Paul Rogers and I headed out to the track to get the car and container unloaded and the headers fitted ready for testing. The headers fitted like a dream and bolted up easily and very neatly. When we warmed the car up the first thing we noticed was how different the car sounded and how responsive it was on the accelerator pedal. This was going to be very interesting!

I always suspected the weather during the Test and Tune would not be representative of race day weather, the major difference being T&T track time was 10am to 4pm, and for qualifying on Saturday and eliminations on Sunday Super Stock didn't hit the track until 4.45pm! No Fremantle doctor in the middle of the day to cool the air down!

The weather was very hot and humid at the track with Density Altitude around 2800', 73% Humidity and Correction Factor up around 1.065! By far the worst and most uncomfortable air I have ever driven in. On the first T&T pass we didn't make any changes to the car other than fit the headers, however I knew the engine would be rich due to the terrible air (which the Tri-Y's like). Running it out the back door at 7.54 @ 183.29 was encouraging however thinking that the air would be better in qualifying we decided to pack it away and not wear the engine out when there was nothing to prove. In hindsight one or two more passes at the T&T might have helped on the weekend. 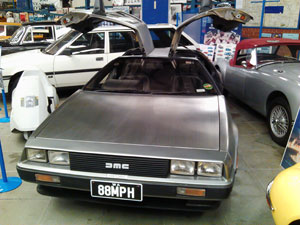 Delorian at the WA MuseumWith nothing planned for Thursday and Friday, Paul and I did the touristy thing and visited the Western Australia Car Museum, Fremantle and Scarborough Beach. We had dinner with the Soldatos Pro Stock team on Wednesday night and then ran into Peter Ridgeway, John O'Kearny and Dave Rogan on Thursday night and ended up at a little Pizza restaurant listening to the four of them reminiscing about the old days of Drag Racing!

Friday was setup day and we made a quick trip up to the airport to pick up Matt and came back to the track to get the container unpacked and ready for Saturday qualifying. By 5pm on Friday the weather was still very hot and humid and we starting talking about the possibility of the air not getting any better on Saturday.

Saturday's first round of qualifying was at 4.15pm and with the hot and humid weather I decided to run the car to 1200' to see where we were and make a decision after that for the remaining two passes. On that first pass I did get off it at 1200' and the car ran 7.55 @ 170.1mph. By getting off it early I took off 13mph and probably around 0.04~0.05 of a second in ET. The 60' time was still slow at 1.085 seconds and the car wandered down the slippery track and the RacePak data reflecting what I was feeling in the seat.

Surprisingly running 0.391 under my index had me sitting in the number 2 qualifying position! A surprise for me and the highest I have ever qualified and a number of fast cars sitting further down the order.

For the second qualifying round we decided to run flat out and have a go at Top Qualifying and trying for the 10 bonus points on offer. Sam Gullotto was sitting in the top spot 0.487 under. In improving air the GXP ran 7.476 @ 183.29 (0.47 under) getting a little closer to the top of list.

While the air improved for Q3, it was still hot and humid and I by now I was regretting only doing the one pass on Wednesday testing as we might have been one or two passes ahead of where we are now. With a few small adjustments to the engine and chassis I finally got the car down the track with an under the record 7.443 @ 184.04mph. Only just under the ET record, but a full 1mph over the current record that I hold. The biggest improvement being the 60' time which I was able to get down to a more representative 1.057 on the slippery track. Paul and Matt hadn't seen Sam Gullotto run in the 3rd qualifying session, so for about 5 minutes we though we might have been in the number 1 position, however we missed out on the TQ position and 10 bonus points by 0.011 of a second to Sam as his also improved on the third qualifier.

A nice pat on the back to Peter Ridgeway and myself was the fact out of the 4 x B/APA cars there I was the fastest by over 0.1 of a second and the fastest in mph by over 4mph! Running under and over the record in terrible air was a great sign and I am looking forward to racing in good air once again!

The weather on Sunday wasn't much better and more like testing on Wednesday. Hot, humid and very uncomfortable to race in.

As the number 2 qualifier I had a scheduled bye in the second round and decided to stage and accept the green in order to get the car turned around quicker for the semi final.

Round 3 and semi final time I was up against Steve Norman in his B/APA Cobalt. I had knocked my index down to 7.72 and Steve had his reset at 7.78 seconds, an 0.06 second advantage. I had chosen the Right lane before towing out and while sitting in the car ready to go a Comp bike oiled down the start line and we sat there for 15minutes while they cleaned the track. I thought about changing lanes as we had not gone under the tunnel yet and unfortunately decided not to. At 9.10pm there was a lot of dew on the GXP and with the oil now on the track being cleaned up I was getting nervous and in the back of my mind I wanted to be ready if the car broke loose. When I started the burnout and drove forward the engine zinged up with no traction through the area that had just been cleaned. Off the start line and Steve had a better reaction time and I had caught up and got in front just before half track when the car started moving towards the centreline and I couldn't bring it back. The rear end started moving left and right while spinning the tyres and I decided to get off it and rolled through for a losing 8.36 @ 122mph.

In the 60+ runs I have done in the GXP this is the first time I have ever been loose in the car and had to get off it. I know the weather conditions weren't helping and judging by the amount of dew on the car there would have been some moisture on the track as well. Unfortunately only a few minutes later a Super Sedan in the same lane crashed badly just off the start line and the remaining runs in the right lane were all a taking the long way down the track if they were even able to get down it.

So in some ways a disappointing end to the Western Nationals, however I scored 95 points in the championship and am sitting in second place only 5 points behind the leader. The next race meeting will be the Nitro Champs (Sydney Dragway) where the weather promises to be better and I will have to be more careful about running under the record in qualifying and eliminations.

I have written a nice list of maintenance items and improvements to complete prior to the Nitro Champs and once the car comes back from Perth this weekend I will load an in car video so you can all get an idea of running 7's in the GXP!