You'll definitely know the voice and some of you will even know the name. But very few will know the face.

One of the voices of drag racing in Australia is 27 year old Rusty Gregory. An insurance broker during the working week, but come the weekend, you'll hear Rusty calling all the colour and action from Sydney Dragway and the Pro Modified Australia Slamfests.

I had the opportunity to speak with Rusty and he gave me the inside word on what it takes to be a drag racing commentator.

Like many of us, Rusty was introduced to racing through his dad who was into hot rods and the drags. At the ripe old age of 5, Rusty attended his first drag race at Eastern Creek. From that very first meeting he was hooked and his passion for drag racing "spiralled out of control" from there.

With his dad Garry, Rusty attend nearly every event at Eastern Creek until it closed to drag racing in 1997. "We had tickets 1, 2, and 3 to 'The First Race' at Eastern Creek which I've still got in my scrap book today", said Rusty.

In 1996 Rusty won a competition to crew on Wayne Topp's Top Alcohol Dragster. With this experience under his belt, the decision was made to go racing. In 1997 Rusty and his dad hand built a Junior Dragster.

Rusty admits he was (and is) a massive Cory Mac fan, so the Junior Dragster was decked out in McDonalds colours and the measurements were taken directly from a picture of Cory Mac's Top Fuel Dragster, and the ex Ed McCulloch McDonalds Car that had just been imported by Santo Rapisarda at the time. "I owe a big thanks to Santo for that one," said Rusty.

2002 saw the end of Rusty's Junior Dragster racing days. The dragster is now in the capable hands of Adriana MacCaskell (bits of it anyway). Adriana won last year's NSW Championship Series in Junior Dragster and is currently leading the points for 2012.

Late in 2005 Rusty got a call from his good friend John Henman who is the Administration and Operations Manger of Sydney Dragway.

"John rang me one day and said 'we're in a bit of a bind. One of our commentators has left us in the lurch and we don't have any commentators for the day. Would you be interested in having a go?' I rocked up and had my first go at commentary at one of the bracket meets. It all went from there. It was an experience that's for sure", laughed Rusty.

"John called because I'm big on the history of drag racing. I'm a student of the sport, knowing all about the racers, particularly from the 80s and 90s. I must have read every Dragster Magazine as a kid about 50 times!"

Starting with zero media and commentating experience, Rusty has been a regular member of the Sydney Dragway team since 2005. In one year he commentated at over 100 individual events.

Recently, Rusty has wound back some of his commentating commitments. He no longer works at the street meets and has stepped back from a few other aspects of commentating.

"Finding the time can quite difficult. Kathy and I have been married for 12 months now and commentating doesn't put food on the table. I don't see it being a full-time career in this country for a number of years."

Not as easy as it sounds

"If the commentary is bad then everyone notices, if it's good then no one notices", said Rusty with a chuckle.

With no formal training Rusty has had to learn on the job. That way, "you learn very, very quickly. I've had a lot of good teachers along the way including Les Binkhorst (I owe him a lot), Dean Neal, Chad Neylon, Matt Naulty, Wade Aunger and Mark Thomas to name a few."

According to Rusty, "as the link between the crowd and the racer it's important to think three sentences ahead and have your facts straight. Blabbering is the biggest enemy of any commentator - it basically means you don't know what you're talking about or you've run out of things to say."

Recently Rusty broke one of the cardinal rules of commentating and broadcast a piece of second-hand information from a usually reliable source. "Let's just say I said a few things that weren't correct. I received a 'strongly' worded text message from a relative of the racer in question. I won't be doing that again in a hurry."

On the subject of the rules of commentating, one of the major ones is to make sure you get the pronunciation of racers names correct. Rusty proceeds to rattle off a number tongue twisters with ease, each of the racers names often finishing with 'polous' or 'iadis'.

I try to say them and fail dismally, so I'm not even going to try and spell them, except to say that the role of the commentator is to not only entertain the crowd but to also keep the racers on side. The correct pronunciation of a racer's name is step 1.

[ED: On a personal note, commentators stuff my name up all the time. This is how you say it: O-BER-AU-ER. See, 8 letters and it's easy!]

Next you have to have a detailed understanding of the sport of drag racing. You can't wing it with hardcore fans and racers. Much of the information Rusty relies on is "stored upstairs" as he puts it, but when the ANDRA Pro Series roles into town "you've got to bring your A game".

"The week before a big event I start preparing. I have a lot of notes on the pro guys and I make sure I have a rule book handy. It's also important to have a good working relationship with the racers, so you can get some of the inside information to make the commentary even more relevant for the spectators."

And of course the commentary has to be interesting and professional. "You've got to find the right balance between the technical and the entertaining, drop the 'ums' and 'ahs' and put colour and emotion into your voice."

Easier said than done for most would-be commentators. "There are a lot of guys who have had a go at commentary. And they sit back after it and say – 'I can't do this. This is too hard'. You've got to sit there and constantly formulate things in your head and come up with ideas to talk about. For a bracket event this could be 10 hours".

"But don't let that scare you", laughed Rusty, "We're always looking for commentators, ex-racers or educated spectators who can string a sentence together and not swear when they have a microphone in their face."

How to make friends and influence people

Drag racers are really good at building horsepower and going fast. Most drag racers however are really crap at promoting their race team to fans and sponsors.

"I can count on 1 hand the number of racers who have come up to the commentary box and provided intel on their vehicle and sponsors. It's one of the things that drag racers are terrible at - and that's self promotion", said Rusty.

So here's an idea. Commentators are always looking for interesting things to talk about when a racer is on the start-line.

As Rusty explains, "you can see the same car up to 5 or 6 times at a race meeting. You have to come up with new things to say all the time. You don't want people to guess what's going to come out of your mouth next. You're only out on the track for a minute and half - 2 minutes max. The second your car crosses the finish line all the eyes go back to the start line."

And this is where you can help yourself and make some valuable contacts while you're at it. Here are some tips: 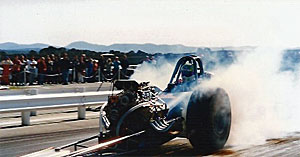 The LA Raider - tucked away in Rusty's shed (Photo courtesy Lee Davis / Western Auto Pics)While Rusty has settled into the role of a commentator with relative ease, there is also the ambition to get behind the wheel once again.

"Sitting in my shed is the LA Raider font-engined dragster. Between the chassis rails is a blown KB backed by a 2 speed Lenco. It's about 70% done and is destined for Supercharged Outlaws once I'm ready to race again."

Until then, Rusty loves his role in the commentary team. "Thanks to my wife Kathy and parents for helping me live my dreams. And thanks to the fans and the drag racers, it's the people in the sport that keep you here."