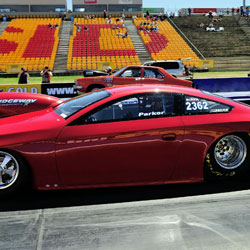 As you might remember, back at the Winter Nationals in June I managed to damage the TRE engine that I bought with the GXP back in 2010. Unfortunately the culprit was the gudgeon pins flexing at high rpm and galling in the piston bores. One piston came apart and the others were all tight in the bores and ready to let go.

After the engine damaging qualifying pass Peter Ridgeway and I were already talking about how to get the car back together again for the start of the season which was the Australian Nationals held last weekend at Sydney Dragway.

After a couple of months of hard work by Peter and Arthur from Custom Engines I brought the new bullet home to be fitted into the GXP mid October. 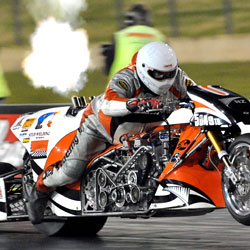 Athol Williams - the flying KIWI (Photo courtesy John Morris)Athol Williams has always had a passion for bikes. You can hear it in the way he speaks and assumes you know what he's talking about. From a Suzuki 125 Stinger, to a RD350 Yamaha, to a Honda 750k1 and up to a Kawasaki 900, Athol rattles off the street bikes he's owned and the mods he's made.

It's a blur of brand names and parts that are completely foreign to me. Luckily we steer the conversation back towards drag racing before he works out that I'm completely out of my depth.

Athol's first introduction to drag racing was watching Ray Peterson in the early 70s roar down New Zealand's Champion Dragway on his supercharged Triumph and later a Nitro Honda. That's when he decided he "wouldn't mind having a crack at this drag racing caper." 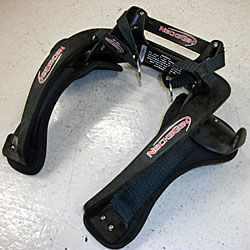 Necksgen - Head and Neck RestraintsWhen I decided to make the move into Super Stock, one of the first things I was aware of was upgrading my safety gear to comply with ANDRA rules for vehicles faster than 7.50 seconds.

On the vehicle side of things Jerry Haas Race Cars took care of the chassis which is built to comply with SFI standard 25.1E. Jerry also fitted a 5Lb fire system that is plumbed into the engine bay and drivers compartment, just in case.

ANDRA rules state, that a Neck Collar is required in all vehicles quicker than 7.50 seconds (1/4 mile) or 4.90 seconds (1/8 mile) and the use of proprietary head and neck restraint systems are permitted where the device meets SFI 38.1 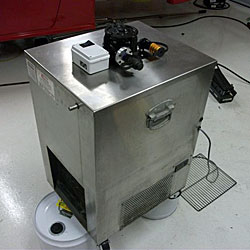 Parker Motorsport Engineering - Refrigerated CoolerG’day and welcome to my third contribution to the Just Drag Racing website. I must be doing something right as Kym has been asking when my next article is going to be ready!

It has been a quiet month for me with Melbourne’s winter keeping us inside out of the cold. That also means away from the workshop where it is also too cold to go unless I need to do something specific. It does however give me lots of time to think about racing and things I can do to improve the GXP outside of the engine program that Peter and Arthur are taking care of.

Even though it has been cold and wet down here in Melbourne I have been concentrating on some small adjustments to the GXP while getting it ready for the 2013 season. I have fitted a new diff centre with a different ratio and freshened the transmission ready for the new engine to be completed very soon. I have made some other minor changes to the setup which should see some improvements on the track. We will see if I have been successful in November when I head up to Sydney to test prior to the Australian Nationals. 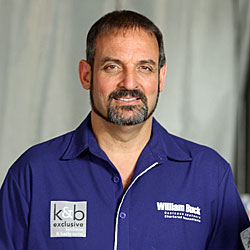 Robin Judd is an accountant by profession, specialising in planning and budgeting. One of the 1st things most accountants will tell you is ‘invest your hard earned in income producing assets’. In other words, don’t buy a drag car and go racing unless you can make it work financially.

After spending some time in the stands at Ravenswood Raceway in Perth, Robin decided to try his hand at operating a racing business so jumped head-first into the drag racing game back in 1998. It’s been an interesting, often exhilarating and sometimes frustrating journey for Robin and his team.

After 14 years of running in ANDRA Top Doorslammer, Robin decided to call it quits after the Winternationals in June 2012. 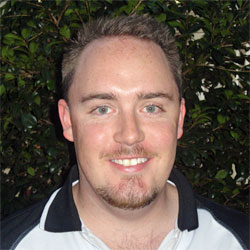 Rusty Gregory - the face behind the voiceYou'll definitely know the voice and some of you will even know the name. But very few will know the face.

One of the voices of drag racing in Australia is 27 year old Rusty Gregory. An insurance broker during the working week, but come the weekend, you'll hear Rusty calling all the colour and action from Sydney Dragway and the Pro Modified Australia Slamfests.

I had the opportunity to speak with Rusty and he gave me the inside word on what it takes to be a drag racing commentator. 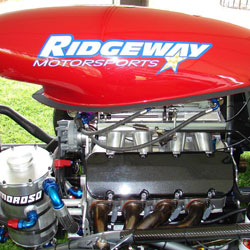 For this article in Just Drag Racing, I thought I would go through some of the differences between racing my high 9 second Super Sedan and my mid 7 second Pontiac GXP in Super Stock.

There are some basic similarities between to the two cars, four wheels, 9" diff and 4 link suspension, and in all honesty that is where it ends. Everything else on the two cars is different. The Commodore was a right hand drive factory steel sedan that had a ½ chassis and roll cage fitted, the GXP is a left hand drive full chrome moly chassis that weighs approximately 100kg bare.

The steel body of the Commodore was standard, however the doors, bonnet and boot were replaced with fibreglass replicas whereas the GXP has a lightweight carbon fibre body with modified aerodynamics (as per NHRA Pro Stock rules) that means it is much slipperier through the air. The ONLY factory original components on the GXP body are the standard Pontiac G6 head and tail lights, again as per the NHRA rules.