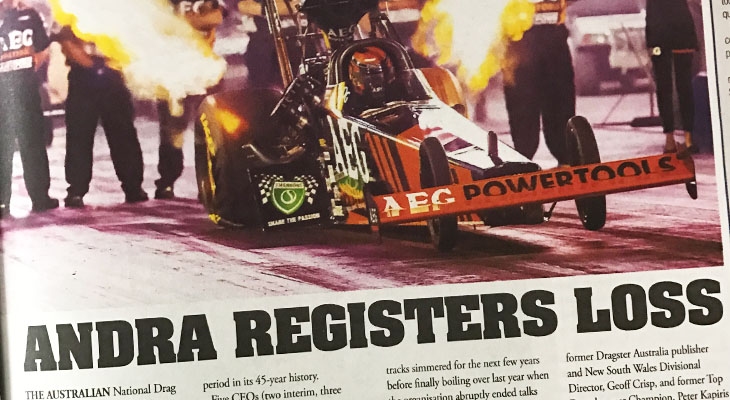 The Australian National Drag Racing Association (ANDRA) has reported a considerable $410,880 loss for the 2015/16 Financial Year – its fifth negative financial result in the past six years.

The loss, revealed to ANDRA members at its annual general meeting held in Adelaide last week, increases the organisation's total losses to a staggering $1.224 million since 2011.

The poor financial performances coincide with ANDRA's move from an association to a company structure in mid-2011, a change designed to bring drag racing's major sanctioning body's operations into the modern era.

But rather than what was hoped to be a period of prosperity for ANDRA has become the most turbulent and unstable period in its 45-year history.

Five CEOs (two interim, three full-time) have followed since the controversial dumping of the respected Tony Thornton, and there have been three different board chairmen.

Thornton, who ran a tight but strong financial operation, was unceremoniously walked from head office after 25 years at the helm.

Within weeks, the new ANDRA board launched a hostile takeover of Drag Ltd, a promotional and marketing company it co-owned in conjunction with Australia's 'big three' tracks – Willowbank Raceway, Sydney Dragway, and Perth Motorplex – to run the professional Group One racing categories.

Tensions between ANDRA and the tracks simmered for the next few years before finally boiling over last year when the organisation abruptly ended talks with the tracks to find a solution to the issues, and then refused to sanction the tracks-promoted 400 Thunder series.

That refusal caused a major split in the sport and led to the tracks seeking sanctioning from the US-based International Hot Rod Association (IHRA), introducing competition into the market.

While Perth has recently returned to the ANDRA fold, both Willowbank and Sydney have signed long-term sanctioning agreements with the IHRA, which provides sanctioning and competitor licensing at significantly reduced costs.

Following the AGM, it was announced former Dragster Australia publisher and New South Wales Divisional Director, Geoff Crisp, and former Top Doorslammer Champion, Peter Kapiris had been elected to the ANDRA board.

Kapiris nominated for a casual vacancy on the board, while Crisp was voted into a vacant Divisional Director's position.