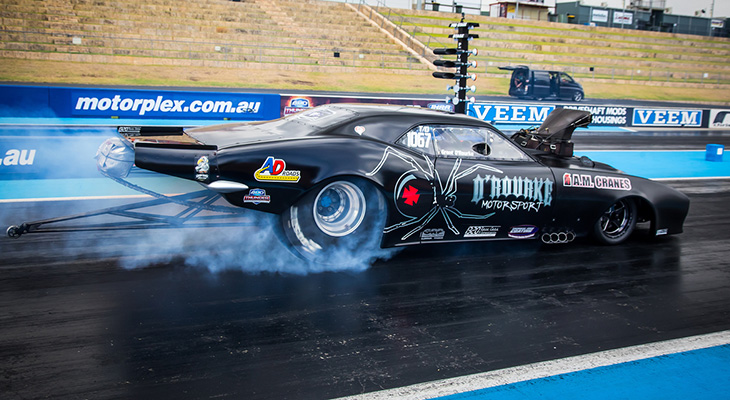 Fans will be the biggest winners at this week's 45th Annual Home Group WA Westernationals with a rare double-header when 400 Thunder returns to Perth's premier motorsport venue, the Perth Motorplex.

As well as qualifying for the weekend's Westernationals title, Friday night's action will double as the semi finals and finals from December's rain affected Nitro Slam event for Pro Slammer and Top Bike.

O'Rourke will have to fend off Sydney's Mark Belleri and the Holden Trade Club Monaro in the semi finals, who sits just 10 points behind him in the standings.

"Zappia's paying the penalty for making a mistake, and we've got a chance to cash in on it as long as I can manage the rest of the field," O'Rourke said.

"It's been frustrating to wait for the semis. I don't know if we're in as good a position as we were that weekend because everything just gelled for us. We only have one run before the Nitro Slam eliminations to get that flow back and stay on top.

"I know what we're up against, so we have a game plan and hopefully we can put it all together on the night. Facing Belleri first up is do or die, because whoever goes through will be second in points heading into the Westernationals eliminations."

Priolo said he feels he can go all the way to claim a maiden win after downing Zappia, but will need to overcome Victorian Peter Kapris first.

"I've been racing Pro Slammer for three years now, and I've been runner-up in in two finals, so I'm hoping it's third time lucky," Priolo said.

"I'm a very competitive racer and I don't ever go into an event thinking I don't have a chance of winning. I know we are capable of taking it to the next level.

"Beating Zappia was definitely a career highlight, and good for the sport. Fans love to hate him because he's the king and they like to see him get beaten.

"The Watsons Express Transport Chev Coupe has had a major overhaul in recent weeks but it will come down to the night. Kapris is nearly perfect on the tree, so I'll need to be on the top of my game."

In Top Bike, Chris Matheson looks to stop Mark Drew from claiming back-to-back rounds in their semi-final pairing. After a disappointing opening round for Matheson, the three-time champion is confident his new engine program will yield a result.

Pro Alcohol will make its first of two visits to Perth for the Westernationals, set to be a battle of the Queenslanders, with the likes of 17-time champion Gary Phillips in his Lucas Oil Funny Car hunting points-leader John Cannuli in the Crossroads Racing Funny Car and local hero Craig Glassby, who recorded the quickest Funny Car pass in the country at the event last year.

As well as the Professional brackets, the Westernationals will also host the second round of the six event 400 Thunder Sportsman Series, which will be the first of two chances for Western Australian Sportsman racers to contest the new national series on home soil before the series returns to the east coast.

The Westernationals is the first of three major 400 Thunder events to hit Perth Motorplex in five weeks, with the kings of drag racing, the 10,000 horsepower Top Fuel dragsters returning 19-20 February and 5-6 March.

Tickets and further information about the Home Group WA Westernationals double header can be found at www.motorplex.com.au.