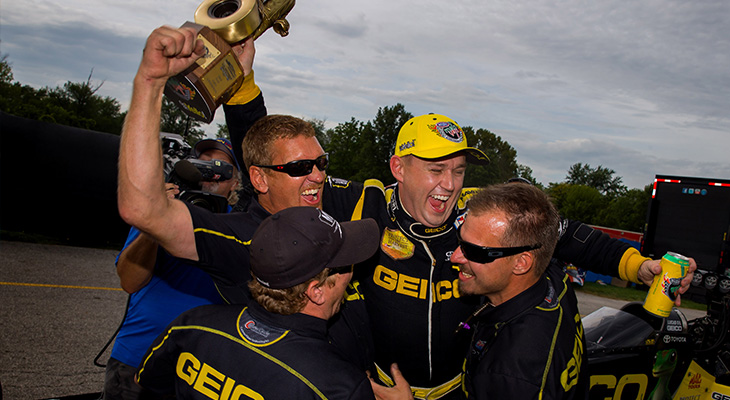 Adelaide-born Crampton moved to the United States in 2004 to chase his dream of becoming a professional driver in the world's biggest drag racing championship – the NHRA's Mello Yello Drag Racing Series.

After 10 years working as a crewmember in various roles for a number of the sport's major teams, Crampton realised his dream in 2014 when he was signed to drive the GEICO Insurance Top Fuel dragster for Morgan Lucas Racing.

Crampton has since gone on to become Australia's most successful driver in the series, with seven national event victories in eight final rounds, and recording three straight Top 10 point finishes, including a best of third in 2015.

Crampton's greatest success came in his rookie year when he stunned the sport to win the 60th anniversary edition of the world's biggest and most prestigious race, the Chevrolet Performance U.S. Nationals.

That year, he was also presented the NHRA's rookie Road to the Future Award, and voted leading auto racing industry publication, Racer Magazine's Rookie of the Year.

Crampton said he was thrilled to have the opportunity to race a Top Fuel dragster at home in Australia for the first time.

"I have wanted to race back on Aussie soil for quite some time, and to now have that chance and drive the LTFR dragster for the Lamattina family is quite an honour," Crampton said.

"Lamattina Top Fuel Racing is a world-class team with world-class equipment, and while we're up against some very strong opposition we'll be going all out to achieve a great result at Sydney Dragway.

Team boss Phil Lamattina said he was excited to secure Crampton for the event.

"You don't get opportunities to put drivers of Richie's calibre in your race car very often, so when he became available we grabbed the opportunity with both hands," Lamattina said.

"Australia's Top Fuel competition is tough, we're up against outstanding teams like Rapisarda Autosport International, and signing an international star like Richie Crampton means Sydney Dragway's race fans are in for one fantastic show."

Full event details will be confirmed on sydneydragway.com.au and 400thunder.com.au.