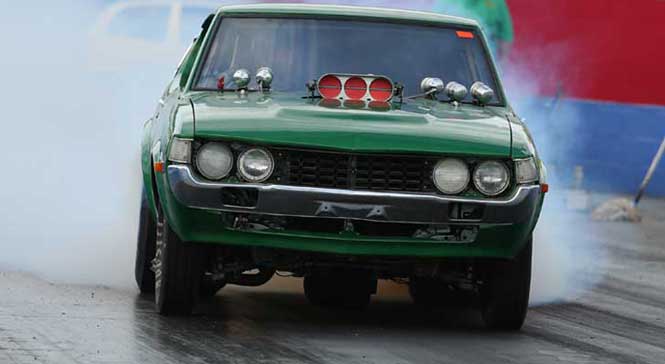 Quarter-mile rookie Warrick Baczynski is hoping to take the lead of the Outlaw championship this weekend, when the JP Racing Eighth Mile Drag Racing Series gets underway tomorrow at Benaraby Raceway.

The 27-year-old, who is currently second on the points’ ladder for the new-for-2014 FG Loy & Sons Earthmoving Eighth Mile Outlaws bracket, just two points behind leader Rodney Hansen, will be hoping for a home-ground advantage at his local track.

With two rounds left to run in the 2014 championship, Warrick is keen to play down his chances – and focus on the task at hand.

“This is only my first year of racing so I have no expectations of winning or even placing,” said Baczynski, who also competes in Competition and Supercharged Outlaws brackets.

“Rodney is at performing so well at the moment. He is on the top of his game, so I don’t think I have a chance of winning the title this year, but to be in the mix at the top of the field is great.”

The second-generation racer was introduced to the sport by his dad Peter, and signed up to race alongside him and his ‘Gin Gin Bandit’ in his own 1977 RA28 Toyota Celica powered by a 400 cubic inch race block.

“Dad and I built the car and to be able to take it out on the track and race it is a pretty great feeling,” Baczynski said.

“At times we have to race against each other, and when that happens you just have to treat it the same as if you were racing anyone else.

“He is a good competitor and when we aren’t facing off for the win it is good to have his experience to call upon.”

For more information, head to: www.willowbankraceway.com.au