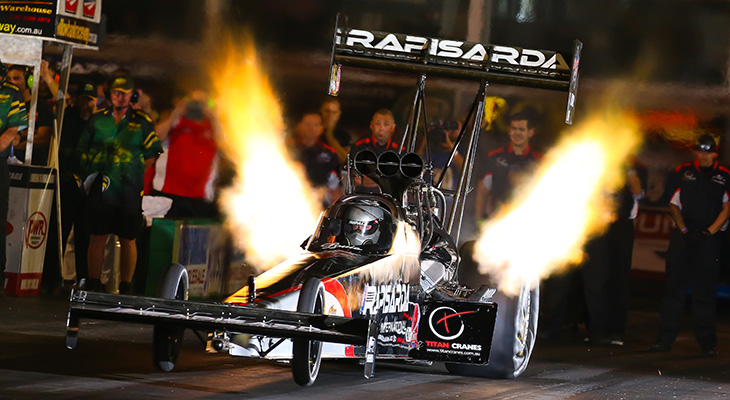 ANDRA looks set to do a sensational backflip on its decision not to deal with 400 Thunder as the ANDRA Group 1 drag racing series continues to struggle.

In a Motor Mail newsletter issued to members late last month, ANDRA informed members its board had agreed to a "one series concept approach" for next season and it would contact the 400 Thunder Commission along with Willowbank Raceway and Sydney Dragway about the venues running one event each in a reunited national series.

"ANDRA is going to lead the initiative and will be as flexible as it needs to ensure there is something for everyone. The two series model is not sustainable and creating unnecessary financial outlays," ANDRA Chairman Terry Jongen said.

"When we have some models to discuss and we have consulted with Driver Groups, we will then contact promotor [sic] groups, including the 400 Thunder Commission to facilitate a way forward.

"We will also look to meet with Willowbank and Sydney race venue representatives who will be requested to have one event each involved in a national series, without their agreement nothing will change.

"The new national series model needs to showcase Group 1 whilst taking into consideration all other Sportsman brackets."

The news comes after 18 months of turmoil and public bickering between ANDRA and 400 Thunder, owned by Australian Professional Drag Racing (APDR), with the sport remaining split.

APDR, a not-for-profit promotional company, is 75 per cent owned and fully funded by Willowbank and Sydney, with the six professional racer representative groups owning the remainder.

The turmoil started in June 2015 when ANDRA released details of a private meeting with a number of the country's leading promoters who were seeking a major shakeup of the sport, which included discussions about management rights to the professional classes, having ANDRA return to a sanctioning body only status, asking Divisional Directors Phil Parker (Vic) and Jongen [WA] to step aside, and the ANDRA board not to renew the contract of then-CEO Malcolm Bulley.

Even while at loggerheads, APDR remained intent on running 400 Thunder events under traditional sanctioning and continued to negotiate a satisfactory outcome, but ANDRA withdrew its services.

Sydney, Willowbank and the recently opened Springmount Raceway near Cairns, all shifted to the US-based International Hot Rod Association (IHRA), and all are believed to have signed long-term, multi-year sanctioning agreements.

ANDRA last year reported an annual loss of over $410,000, bringing its losses over the past six years to almost $1.2m.

The IHRA in turn has opened an office in Australia, with champion racer Maurice Allan appointed CEO. IHRA Australia is believed to have issued close to 2,000 local licenses, around two-thirds of ANDRA's total.

RELATED STORY: Racing Onn Promotion's Rino D'Alfonso Asks ANDRA "Why the need for all this turmoil?"